Scharfenberger has led the Albany Diocese since 2014. He says he will be in Buffalo at least one day a week and will use "electronic media" when needed. He arrived back in Albany aboard an Amtrak train Thursday afternoon.

"Typically when an Apostolic administrator is appointed it's a temporary position and it really depends upon the Holy See as to when they find a bishop to permanently replace Bishop Malone, and everybody speculates, you know, it could be a month, could be two months, some say Easter, you know, Bridgeport it took them a year and a half.”

Scharfenberger said he spoke with Malone.

"He's not in the diocese at this point, and I don't know where he will actually be. He's retired, that's his status, and he has a great deal of freedom as to where he himself would like to end up."

"You know I love Albany, and I kind of think at my age, I'm 71, so the likelihood is high that they'll let me stay." ~ Bishop Edward Scharfenberger

Scharfenberger emphasized he is not replacing Malone unless Pope Francis reassigns him.

"You know I love Albany, and I kind of think at my age, I'm 71, so the likelihood is high that they'll let me stay but I have no inside information, who they may be looking for and who they might add."

He expects to address the possibility of the Buffalo Diocese going into bankruptcy.

"The way in which I'm approaching my assignment in Buffalo is actually the way I have been ministering here in the diocese of Albany. We've taken a very strong position in support of victims and survivors of sexual abuse."

Malone offered to retire two years before the mandatory retirement age of 75 after learning the results of a Vatican-mandated inquiry into the Buffalo Catholic Diocese and its handling of abuse cases. More than 200 lawsuits have been filed by people claiming they were abused by Western New York priests. 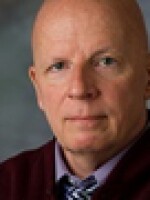 Dave Lucas
Dave Lucas is WAMC’s Capital Region Bureau Chief. Born and raised in Albany, he’s been involved in nearly every aspect of local radio since 1981. Before joining WAMC, Dave was a reporter and anchor at WGY in Schenectady. Prior to that he hosted talk shows on WYJB and WROW, including the 1999 series of overnight radio broadcasts tracking the JonBenet Ramsey murder case with a cast of callers and characters from all over the world via the internet. In 2012, Dave received a Communicator Award of Distinction for his WAMC news story "Fail: The NYS Flood Panel," which explores whether the damage from Hurricane Irene and Tropical Storm Lee could have been prevented or at least curbed. Dave began his radio career as a “morning personality” at WABY in Albany.
See stories by Dave Lucas
NOW PLAYING
Proud Sponsor of WBFO NPR