And here now is the tale of a softball team, a tale told by our commentator Kevin Kling.

A few summers ago my brother calls me up and says, `Hey, can you play softball this summer?' I say, `Yeah, I probably could.' He says, `Great! I got the old team together, our Little League team.' I says, `Steve, no. We were terrible. We went 0 in 2, 0 in 2 years. We never won a game. I mean, you could look at us and see we were all bound to be accountants and thespians.' He said, `You gotta play. I got Dick's Bar to sponsor us.'

Oh, man, Dick's Bar. At the Osseo High School reunion, you could tell someone you'd discovered a cure for cancer, and they'd say, `Oh, that's nice.' But if you say, `I play for Dick's Bar,' they would say, `You're kidding! Hey, what are you drinking? You want another one. This is my sister. Let me praise you, for you are a god.' I say, `Yeah,' to my brother, `Yeah, I'm in.'

At our first game, I look at our team, and they look like the same guys, a little grayer, a little heavier, one thespian and nine accountants. The other team hasn't shown up yet, so we take the infield. My brother hits a ground ball, and pocket protectors and reading glasses go flying. I say, `Hey, maybe we should have rehearsed.' `Too late,' says my brother. `Look.' And the other team arrives, strapping young boxing uniforms stretched over muscles and sinew. But from playing years of softball, I know that young guys can be beat. They've got passion, but not the craft.

Watch out for church teams. There's a lot of aggression that comes on softball night for church teams. Also beware any team with `dog' in the title. Teams with goofy names, like Jerry's Atricks or Fowl Balls, they're usually just that, goofy. But teams with initials followed by the words `construction' or `refrigeration' or `tool and die,' now there's a problem.

Our team, Dick's Bar, takes the field. Now this is May in Minnesota, so it is cold, like 30 degrees, freezing, and we're all in jackets and stocking hats. My brother's in his duck-hunting outfit, camouflage, boots and Gore-Tex hat. We take our positions in the field, and before I pitch, I look around to make sure everyone's in place. And my brother's in the outfield laying flat on his stomach, all camouflaged, like he's duck hunting in a blind. All he needs is a bunch of other softballs laying around him like decoys. I don't know whether to laugh or cry. I pitch the ball, and the batter hits it to center field. My brother jumps up, mimes holding a gun and yells, `Boom, boom,' and catches it. Our team is now ecstatic. We could win this thing. It took 30 years for this day.

The bottom of the last inning, this was spectacular, and this is how I remember it. OK, the score is tied. I'm up first. And before I know it, cursed by fate, I'm down two strikes. The other team is yelling, `Swing, batter. Swing, batter,' and I had been. `Wait,' I says, `Wait. Time out. For God's sake, time out.' Then grabbing another weapon that suits my grip, I say, `Quickly, men, tape me. Lash me to the bat, and stuff my ears with Bazooka Joe so I may not hear their taunts.' My crew did as I bade. And stepping forward amid their taunts falling harmless now, I am rewarded by three straight balls and an easy sailing to first base. Cheers from my friends in arms.

But wait. This new island is guarded by half man, half god. I know him to have but one eye, for when he did bat, his comrades shouted, `Good eye, good eye.' The giant asks my name. `Nobody,' I replied. `Well, Nobody, this is the last land you shall see.' But I caught the eye of the batsman, and we did employ the hit-and-run. `Watch, Nobody,' shouted the giant. `He's running. Get Nobody.' Ha, ha, this confuses him team.

My comrade is out at first, but I stand safe on the next island, which is occupied by one who plies me with sweet words, seductive words. `You should stay right here,' he says. `You're safe. I heard you on the radio. You should be on our team. Your other guys are pigs, but not you. Stay. Don't go.' He seems to know me so well. His words of honey tempt. Yet when our next batter flies out to right, I tag up and run to third with all my might.

Safe now, I shed hot tears for the one who sacrificed to move me forward. The third baseman, would-be suitor of this victory, taunts me. `Hey, old man in rags, your body is weak.' You obviously come from the island of Thesbos,' and he laughed and made sport of me. `This victory is ours,' he said. `You shall never make it home.' How dare he court the one I love, young suitor?

But now my brother steps to the plate, standing like an oak, truly the son of our father. The third base coach, our trusted sage, speaks in good counsel. `Two outs,' he says, `run on anything.' And as my brother, with mighty force, swings his bat, I run, the path well worn by past warriors greater than myself. I run toward home, Athena, daughter of Zeus, at my side, bidding me on until a warrior, ruddy complexion, blocks the plate. I smash into him, sending him and the orb flying. As I lay outstretched, bat still lashed to my wrist, Zeus himself, disguised in mask and armor, lord of this flat world, proclaims me safe at home.

Oh, how the heady wine did flow. Oh, the sweet lute play. The young suitors stood stunned, their wives and children groaning in grief and tears, renting garments, tearing hair, shrieking like birds of prey.

We convene in Dick's Bar, sitting in high-back chairs, mellow wine in golden cups. And when we have put aside desire for food and drink, extra cheese on mine, we bathed in burnished tubs, warmed in fleece till Athena closed my eyes with welcome sleep.

When young dawn with her rose-red fingers colored the sky, I awoke in my old bones again. The bat now sits in the corner of my office, tape on the handle, and I await my brother's call.

(Soundbite of "Take Me Out to the Ball Game")

SIEGEL: You're listening to ALL THINGS CONSIDERED from NPR News. Transcript provided by NPR, Copyright NPR. 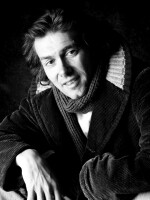 Kevin Kling
Kevin Kling has become well known to NPR listeners thanks to his regular storytelling contributions to NPR's All Things Considered. A recurring voice on the program since the early 1990s, Kling released his third CD collection of his public radio commentaries, Wonderlure, in February 2003. Other recordings include Stories: Off the Shallow End and Home & Away.
NOW PLAYING
Proud Sponsor of WBFO NPR